In celebration of International Women’s Day 2018 we are proud to welcome Detroit’s own Sydney G. James as she returns with her latest edition Codeswitchonya. Pulled hot off the press (wall) from this year’s POW! WOW! Hawaii 2018, this image finds James exploring her ongoing series Appropriated Not Appreciated which as she explains examines “the premise that many want black women attributes, but NO ONE wants black women problems.” Read on as Sydney G. James gives us the story behind her most recent mural and edition, and be sure to grab yours before they are gone . . . 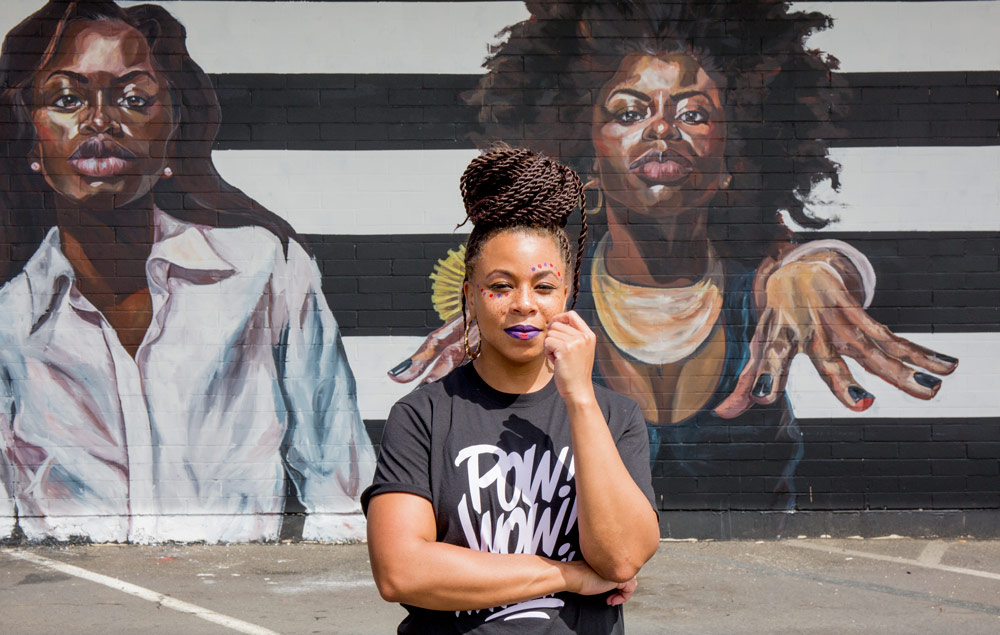 1xRUN: Tell us a little bit about this piece, anything immediate you would like us to highlight about this image?
Sydney G. James: “Codeswitchonya” is a repurposed play on OutKast’s “Stankonia” album cover. While this piece directly pays homage to my favorite hip hop group of all time, it speaks on a much larger issue. The subject in this piece is one woman painted wearing different garments with very different hair. It’s highlighting the fact that most people “code switch” but black women in this society and beyond have to do it the most. We are constantly in the act of making those around us “comfortable.” Be it our looks, hair, tone of voice, subtle actions or aggressive actions, we are seldom accepted as our true selves.

1x: Was this image part of a recent theme, series or show that you had? If so how did it fit into that given grouping?
James: I have an ongoing/growing series that I’ve been working on entitled “Appropriated Not Appreciated.” It stems from the state of black women in this country. The premise is simply that many want black women attributes but NO ONE wants black women problems. The paintings and murals in the series reflect black women through my eyes and I would like the world to see us. 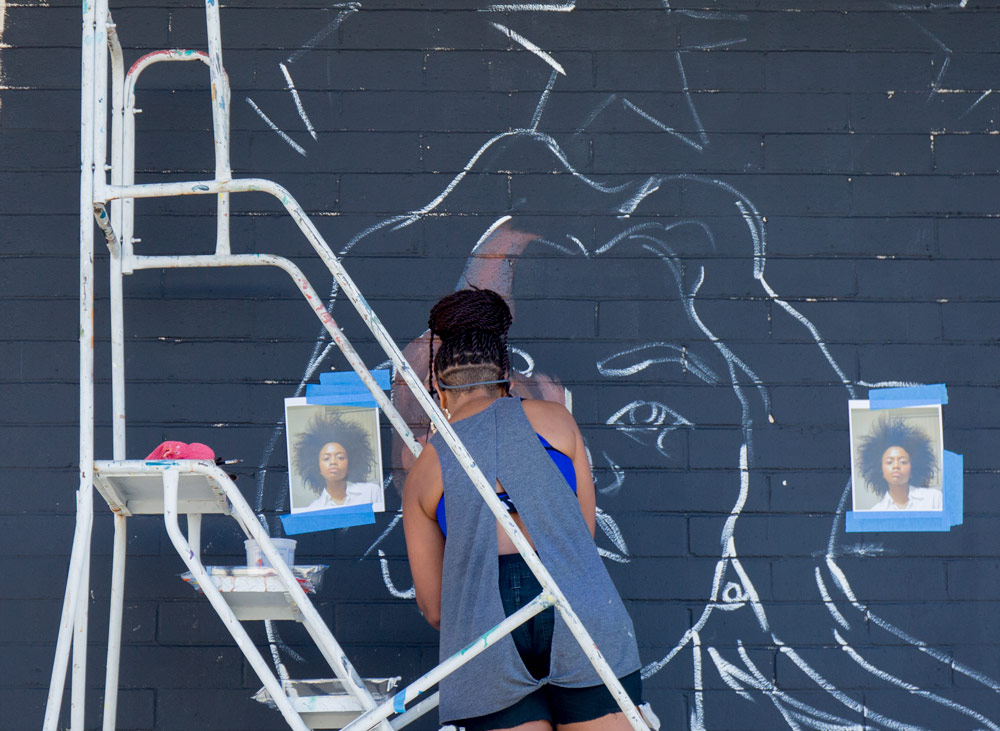 1x: What materials were used to create this original piece?
James: I used exterior house paint and an array of paint brushes.

1x: When was it originally drawn and created, and how long did it take? If it was part of a larger continue series when did that series begin?
James: This piece was painted in February of this year. From start to finish, it took me 2 days and 45 mins (17 hours total) to start and complete the mural during the POW! WOW! Hawaii mural festival. The initial series began in 2015.

1x: Tell us how the idea and execution came about for this image?
James: The idea came from my love of hip hop and iconic hip hop images. I fused the iconic composition with my own content. 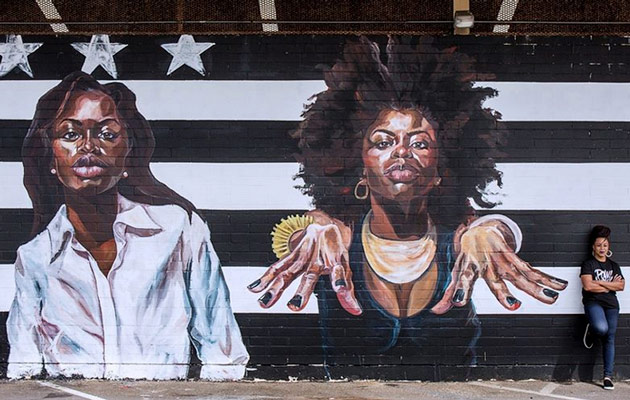 1x: Why should people buy this one of these prints?
James: I think people who connect to the piece should have one. The act of code-switching is a common behavior amongst most people. I believe the overlying theme plus execution makes a great piece to add to or start a collection. 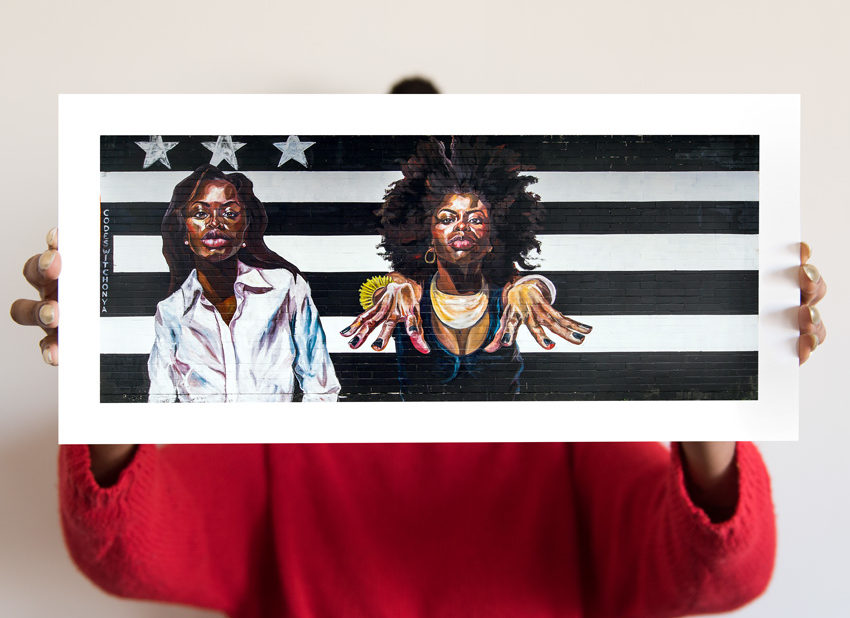 1x: When did you first start making art? What was your first piece?
James: I’ve been drawing since I was 3 years old. I drew Gargamel (villain from The Smurfs) referenced from an image in a coloring book. I showed my mom what I had done. She thought that I traced it, so she sat me down and made me draw it again in front of her. She’s been a believer and my biggest fan ever since.

1x: What artists inspired you early on? What artists inspire you now?
James: Throughout elementary and middle school, I was influenced by cartoons. When I got to college and later adulthood, I was inspired by Leonardo Da Vinci, H.R. Giger, Sebastian Kruger, Alex Ross, Lesean Thomas, and Dubleyoo (to name a few).  The same artists inspire me as well as my peers; Rashaun Rucker, Tylonn Sawyer, Tiff Massey, Mario Moore, Brandan “B MIke”, Askew, Rone, Patch Whisky and Ghostbeard, Michelle Tanguay, Ouizi, LoLo and sooooooo many more. 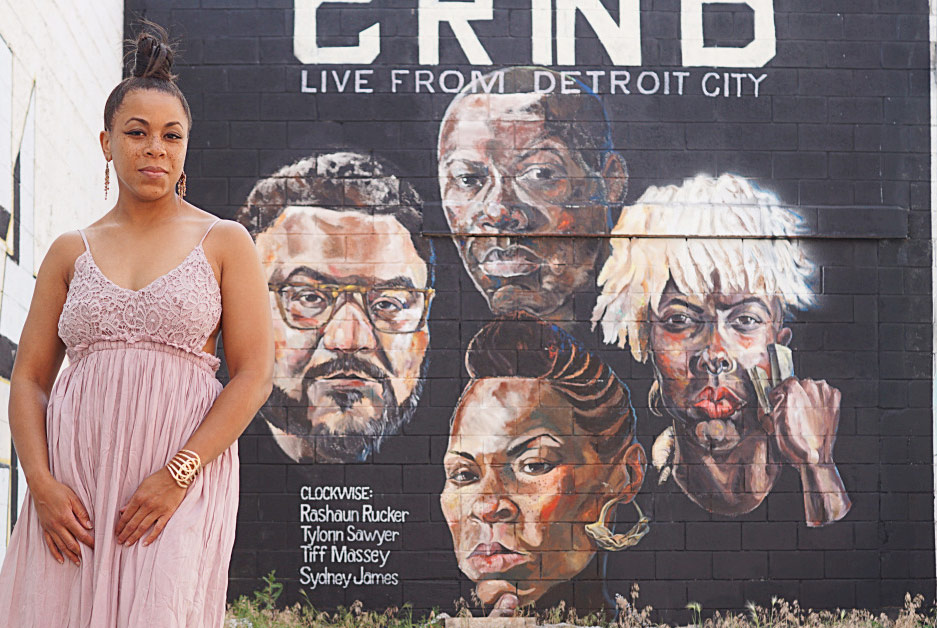 1x: Do you listen to music while you work? If so what? If not then what is your environment like when you work?
James: Sometimes. I can work in silence or to a playlist that only makes sense to me.

1x: If you could collaborate with any living artist who would it be and why? Any deceased artists?
James: I would love to collaborate with Hebru Brantley. Our styles are so opposite, I think the juxtaposition would be so DOPE.  I would want to collaborate with H.R. Giger. His style was so “dark” and fantastical, I think it would add a nice touch to my not so delicate, delicate portraits.

1x: What was the first piece of art that you bought? Do you still have it? The last?
James: A Tylonn Sawyer print and yes. The last was a Sabrina Nelson original painting.

1x: Any big shows or events coming up that you’d like to share?
James: I am 1 of 8 featured artists in the “Beyond the Balcony” exhibit at the Art Village Gallery in Memphis, TN opening March 30th.

Special thanks to Jasper Wong of POW! WOW! Hawaii for the photos of this finished mural.