Take some heavy metal music, ice cream, pop art, and the color pink––mix it all together and what do you get? We’re not sure, but critically-acclaimed street artist Buff Monster has some ideas.

The Hawaiian-born, NYC-based artist has spent more than 15 years animating city walls with melty, one-eyed creatures and candy-colored landscapes. His distinctive style is at once delightful and repulsive; vibrant and absurd. Commanding viewers to “Stay Melty,” Buff Monster’s work has caught the attention of Disney, Hello Kitty, Coca-Cola, Miller Lite, The New York Times, and Banksy.

As subway cars and building façades bloomed with color throughout the rapid graffiti movements of the 70s and 80s, city officials combatted artists with increased police surveillance and efforts to remove the paint. The practice of graffiti removal by city officials and landowners became known as “the buff”.

Where many graffiti artists dread the almost-certain reality that their territorial markings will someday be wiped clean, Buff Monster embraces the prospect. Buff Monster’s work explores the dichotomy of graffiti art and the inevitable “buff”: what becomes of graffiti that can anticipate its fate? how does the “buff” play into the fleeting nature of graffiti art? Buff Monster has used his subversive take on the art form to create some of the most recognizable images in the genre.

In celebration of Bicycle Day (which, of course, has little to do with bicycles), we took some time to chat with Buff Monster about his latest print editions: an LSD-inspired, 3-print blotter sheet set for exclusive release on 1xRUN. 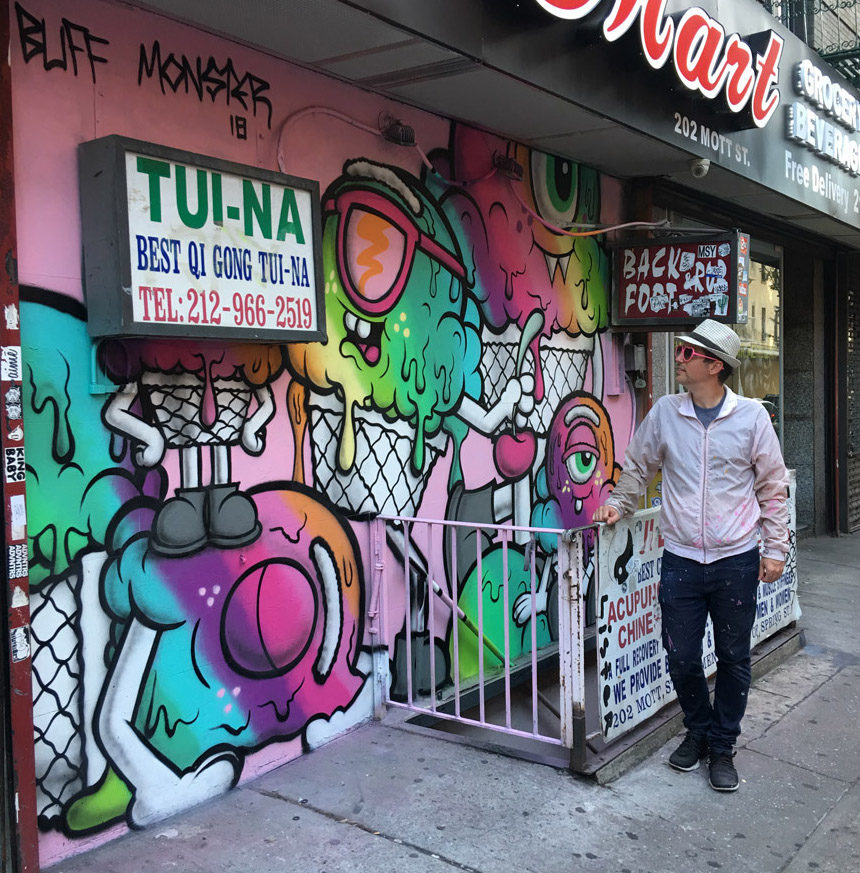 Buff Monster and mural in Lower Manhattan, courtesy of the artist

1xRUN: Tell us a little bit about these Bicycle Day print editions, is there anything immediate you would like us to highlight about this imagery?
Buff Monster: I wanted to make images that people could actually use as blotter sheets, so that even if the recipient wasn’t aware of me, or of the full image, it would resonate with them. I don’t expect anyone to lace them with LSD and sell them, but I’d like them to.

1x:Was this imagery a part of a recent theme, series, or a show that you did?
Buff: I chose each of the images because they’re good representations of my work, and cranked ‘em up to 11 to fit the theme!

1x: What materials were used to create these blotters?
Buff: One is a photo of a section of a mural that I painted last year; one is drawn digitally, and the other features hand-painted elements on top of a digital background. So they’re all over the place, but I think they work well together. 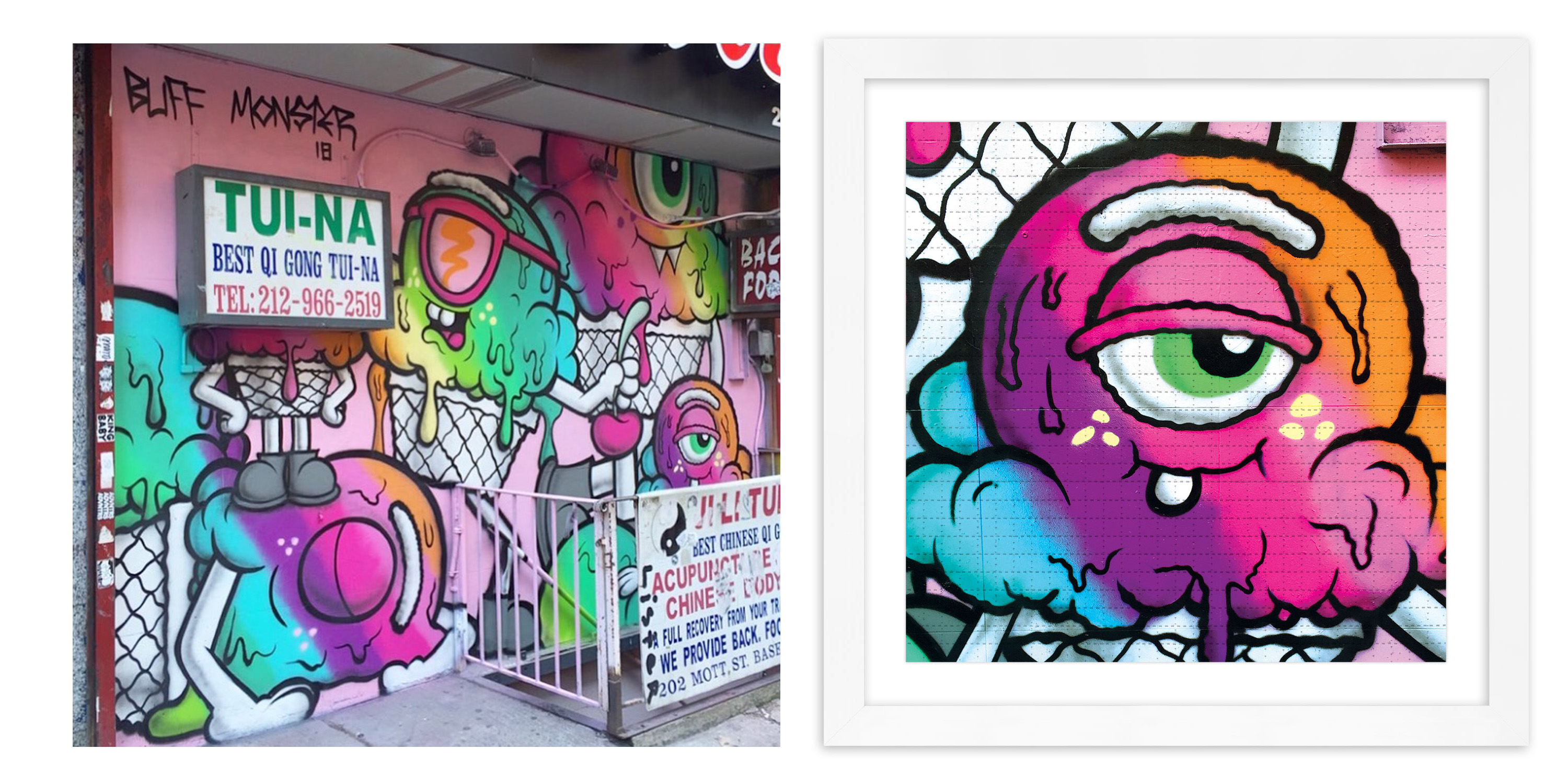 1x: Do you listen to music while you work? If so what? If not then what is your environment like when you work?
Buff: Of course! I listen to a lot of heavy metal. It fuels and inspires everything I do. When I’m working on particularly tedious work, I switch to the Adam Carolla podcast. I’ve been listening to his “nasally drone” for over half my life, and it never gets old.

1x: What was the first piece of art that you bought? Do you still have it?
Buff: The first piece of art I bought is a pencil sketch from Series 3 of Garbage Pail Kids. I found it in 2001, after discovering that John Pound was the original GPK artist. I bought it directly from him, and it’s currently hanging on my wall. I’ve since bought tons of other artwork that John made for GPKs; sometimes from him directly, sometimes from other collectors selling off their collections. I love ‘em!

1x: What was the last piece of art that you bought?
Buff: I bought a canvas from graffiti pioneer Dr. Revolt recently. He had it at a show, but ended up delivering it to my studio. We hung out for a while. That was fun.

1x: What’s next?
Buff: I’m planning on doing another show with Dalek this year, so that’ll be fun! I’m also included in a few group shows that are pretty sweet too! Follow me on social media for more info! 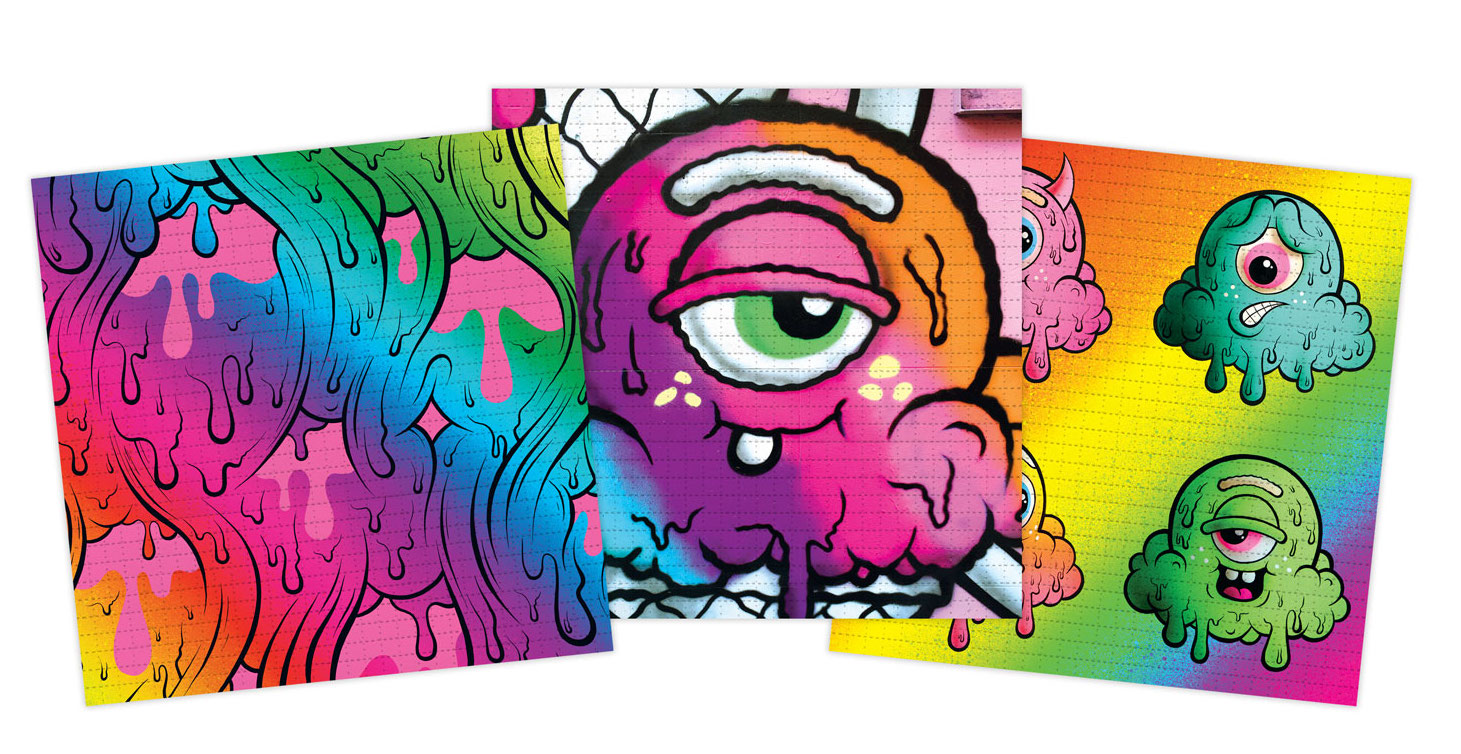