We are excited to unveil Joram Roukes latest mural, the 3rd in a series of co-curated murals by 1xRUN and WeWork at WeWork offices around the world! This latest mural just wrapped up at WeWork’s Amsterdam offices, with previous murals coming from 1xRUN alum Remi Rough in WeWork’s London office (see photos from Remi’s mural here!) and Ellen Rutt & Chema Skandal in WeWork’s Chicago offices. We caught up with WeWork’s Creative Director Jeremiah Britton to discuss WeWork and these latest murals. Check out the photos below to see Roukes latest mural and more! Be sure to pick up Joram Rouke’s latest edition West Side Story here on 1xRUN and follow @JoramRoukes, @WeWork and @1xRUN for more of the latest… 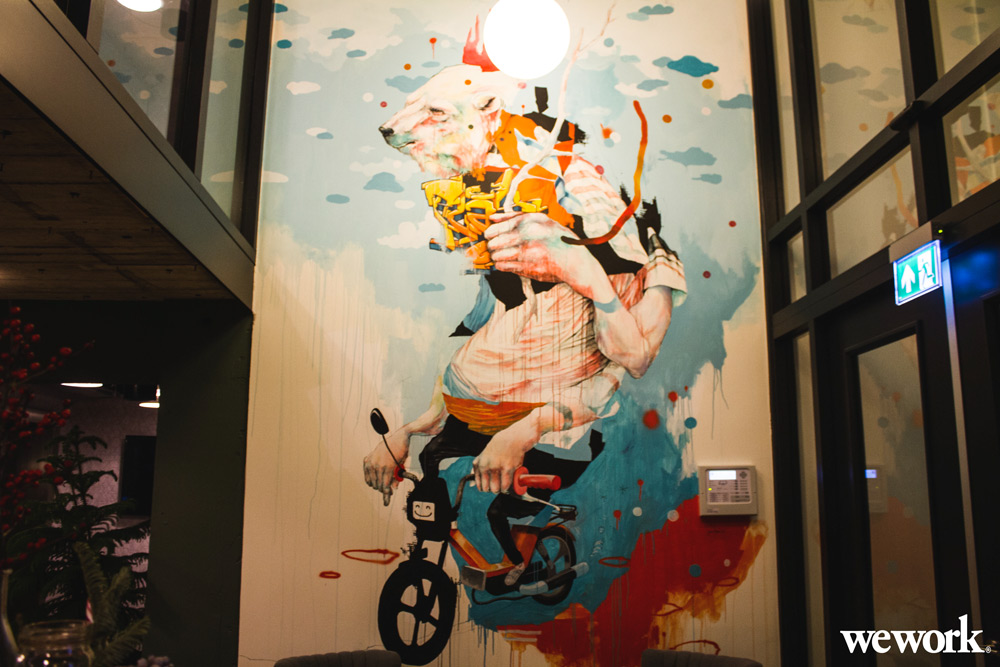 1xRUN: For those who don’t know, tell us a little about WeWork. What is WeWork and what do you do? Why is art such a large component of what you do at WeWork?
WeWork:A lot of people describe WeWork as a coworking space, but it’s much more than that, largely because of our awesome community. We think of ourselves as the platform for creators. We provide more than 40,000 members around the world with space, community, and services they need in order to make a life, not just a living. At the moment we have 68 physical locations in 21 cities and six countries around the world, but we have a digital app as well that allows members to connect and swap services virtually.

Art in general is a major focus for us. Not only does it inspire our members and employees but it is a big differentiator in the market. Nobody else is putting such a focus on supporting local artists and bringing their work into the office space like we are. We believe in it so much that we actually have 6 employees who work full-time with our interior design team to develop, design, and install custom art and graphic pieces as well as work with local artists in each new city. 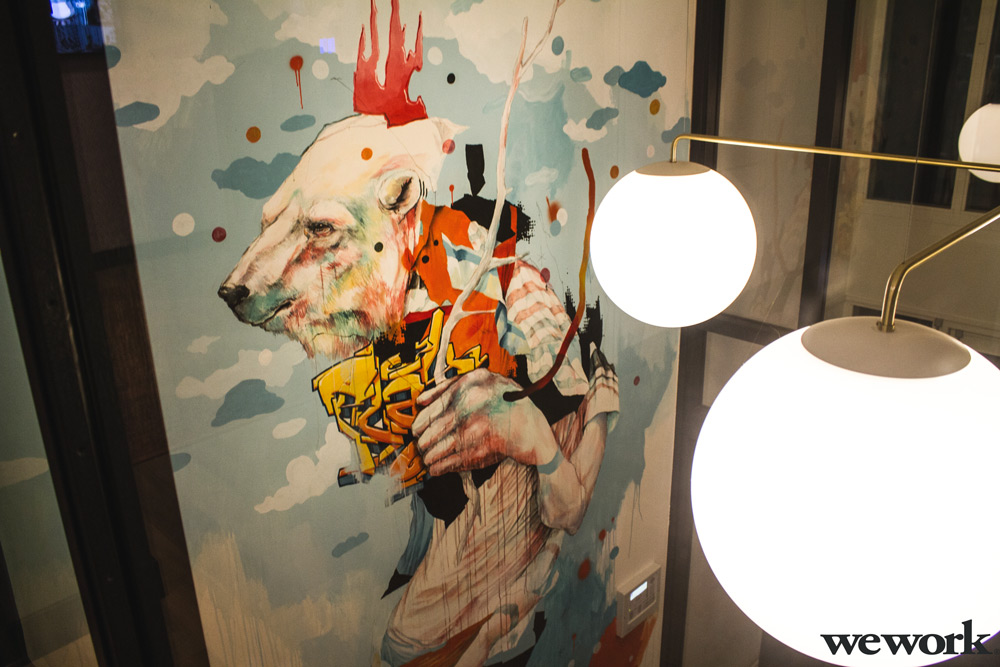 1x: Where and how did the company begin?
WeWork:It all goes back to 2008 when Adam Neumann (the co-founder of WeWork and the company’s CEO) found himself working in the same building as Miguel McKelvey (WeWork’s co-founder and now Chief Creative Officer) in Brooklyn. Adam owned a baby clothing company and Miguel was a lead architect at a small firm. Even though they came from different industries, they realized they faced a lot of the same pain points as entrepreneurs and decided to join forces and develop a coworking space called Green Desk, which was committed to using sustainable materials and furniture. Adam and Miguel realized pretty quickly that their goal wasn’t really the landlord aspect, but the idea of building a community where likeminded people could come together to create their life’s work and serve as resources for one another, so they sold Green Desk, and in 2010, WeWork was born. 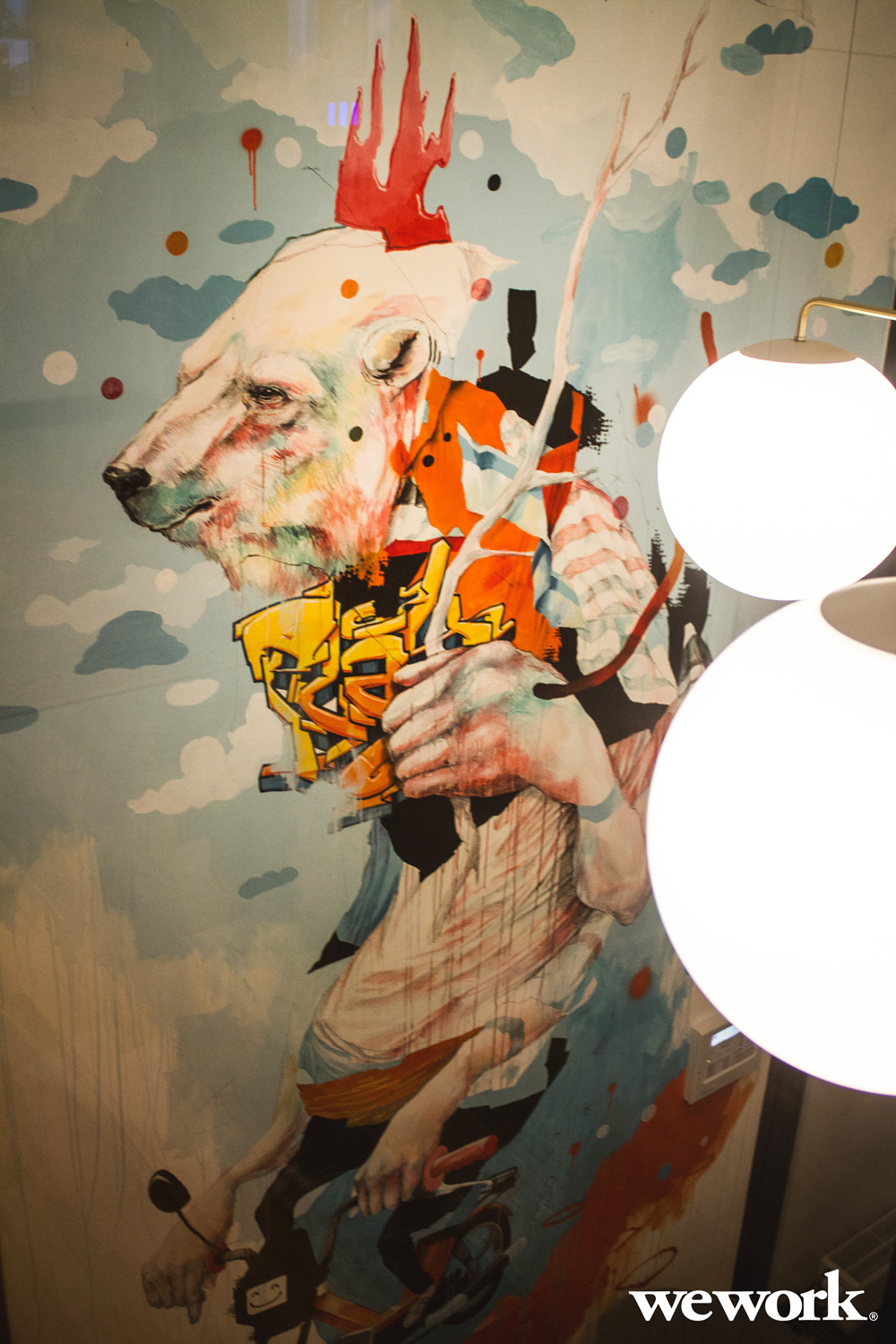 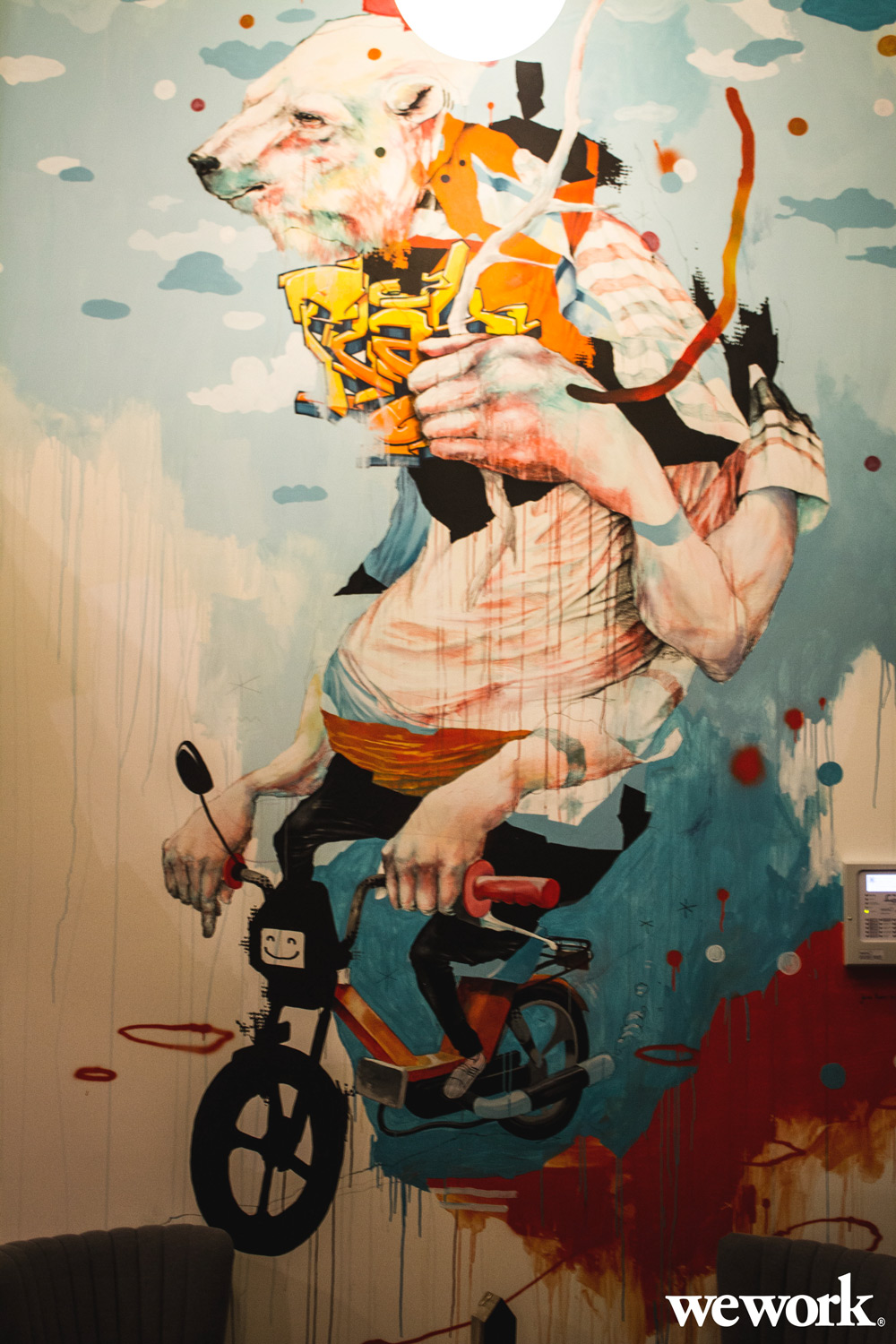 1x: So far WeWork and 1xRUN have curate new indoor murals from Joram Roukes, Ellen Rutt and Remi Rough across your different offices in Amsterdam, Chicago and London respectively, what has the response been like so far across these offices?
WeWork: The response has been awesome. We love the way these indoor murals reflect the neighborhoods they’re part of, and it’s been great to incorporate local artists into the fabric of our spaces—literally. It’s been great to see the members embracing the artwork, taking photos, selfies, and when they refer to the mural in their building they call it “their” mural, which is great!

1x: Why did WeWork feel it was so important to have new original works from contemporary artists go up in these co-working spaces?
WeWork: It’s really important for us to honor the original architecture and vibe of each location we move into. What better way to pay tribute to the area than to incorporate the work of an awesome local artist? A lot of our spaces have a rich history, and we like to complement that history with contemporary art. Art helps inspire our members and our employees, it can start conversations between strangers, and to be honest, it’s just super cool to have these amazing large scale murals in all of our spaces. Not many small businesses with 1 or 2 employees can say that they have an original Joram Roukes or Jason Woodside mural in their office, but with WeWork, now they can.

As far as why we love working with the actual artists, we know that artists are constantly hustling and working to get their work seen and trying to make a living doing what they love just like any other start-up or small business and we love that we can support that. 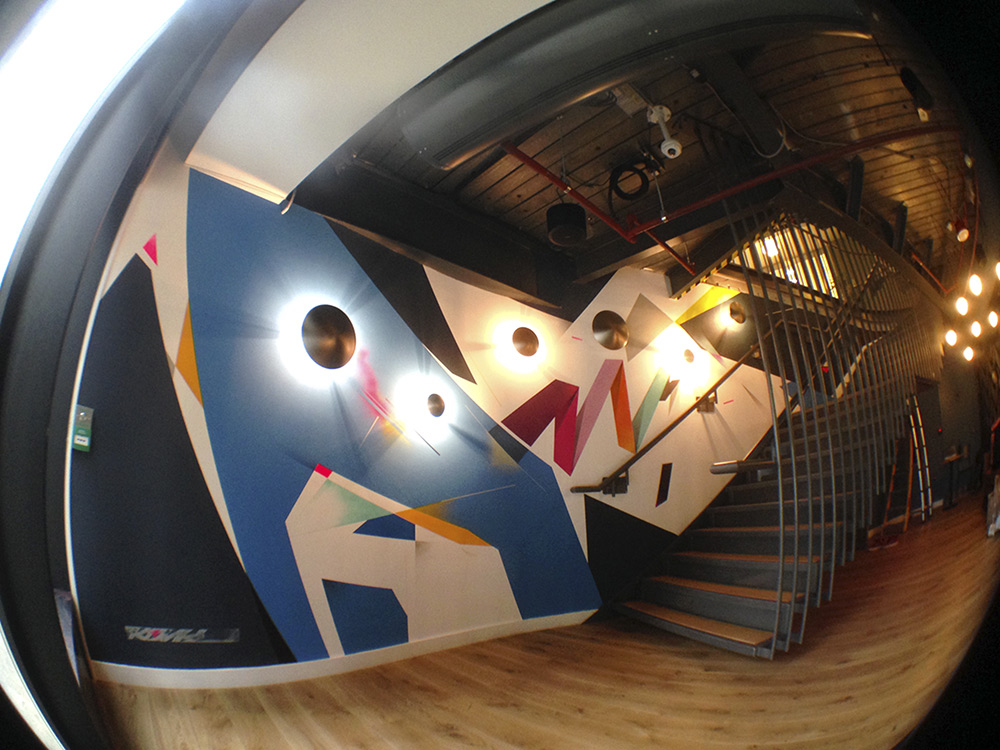 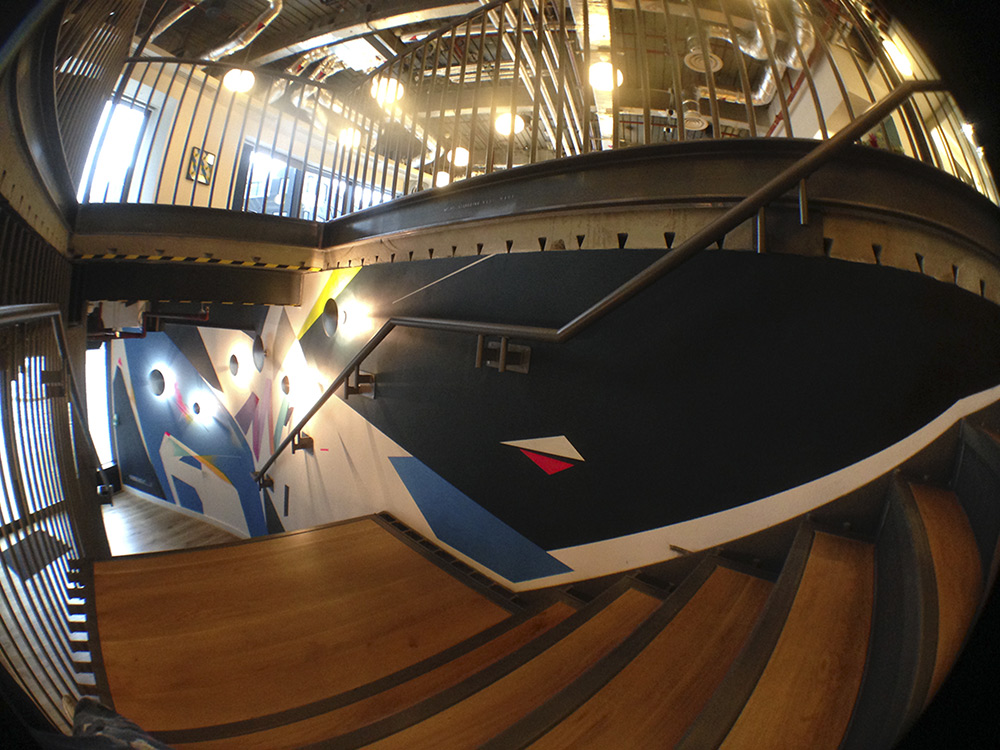 1x: How does WeWork help creatives that may not necessarily have the most typical work schedule?
Our memberships are super flexible, which is great for entrepreneurs or small businesses who might have two employees today but ten six months from now. All our leases are month-to-month, so your company can grow within WeWork. Early-stage startups tend to be unpredictable, so it’s nice to not have to commit to a long-term lease.

In addition to amenities like fruit water; free coffee, tea, and beer; and services like printing and IT, members also have access to more than 40,000 other creators, both via in-person events and digitally through our app. It’s a great way to collaborate around the clock. Let’s say you’re in New York and working on a presentation that’s due the next day and need some design help last-minute. There are probably other members working from London or Tel Aviv who’d be awake and able to offer their services. Or maybe you’re based in San Francisco but are traveling to Chicago for work—you’d immediately have a place to call home, which is realley cool.

1x: What else is on the docket for WeWork as 2015 wraps up and we head in 2016?
We’re excited to expand into some new cities and new countries! We’re coming to Canada (Montreal) and Mexico (Mexico City) in 2016, plus U.S. cities like Denver, Atlanta, and Philadelphia. We can’t wait to grow our global network this year and see all the awesome things we can create together.

1x: Where can people find out more about WeWork?
WeWork: You can check us out online or book a tour at wework.com. We’re also active on Instagram, Twitter and Facebook @WeWork. Feel free to join in the conversation using #wework!

Our art and graphic installation team has their own social media as well and you can follow their crew @WeAreLunchMoney on instagram to see all of the art installations they are currently working on.